What determines whether people feel I am treating them fairly?

Fairness is the quality of behaving in a reasonable and just manner. It is about treating others the right way. But whether these others judge the behavior to be fair depends on their perception of what happened. In other words, fairness is in the eye of the beholder – you might think you behaved fairly, but that doesn’t mean others experienced it as such.

To get people to follow willingly, leaders need to build trust, which hinges on being believed to be fair. If people don’t have faith in the leader’s fairness, they will fear unjust treatment, which might still compel them to follow, but in a compliant, not an engaged, manner.

The model subsequently identifies three ways in which a leader can give people a sense of being treated fairly. These three types of fairness are complementary and can reinforce each other. They can be seen as the input (attitude), throughput (process) and output (outcome) of interaction between a leader and followers. Where leaders, intentionally or inadvertently, fail to behave in a fair manner, they will trigger a variety of fears in the people around them. The model suggests it is up to leaders to choose in which way they want to exert influence. 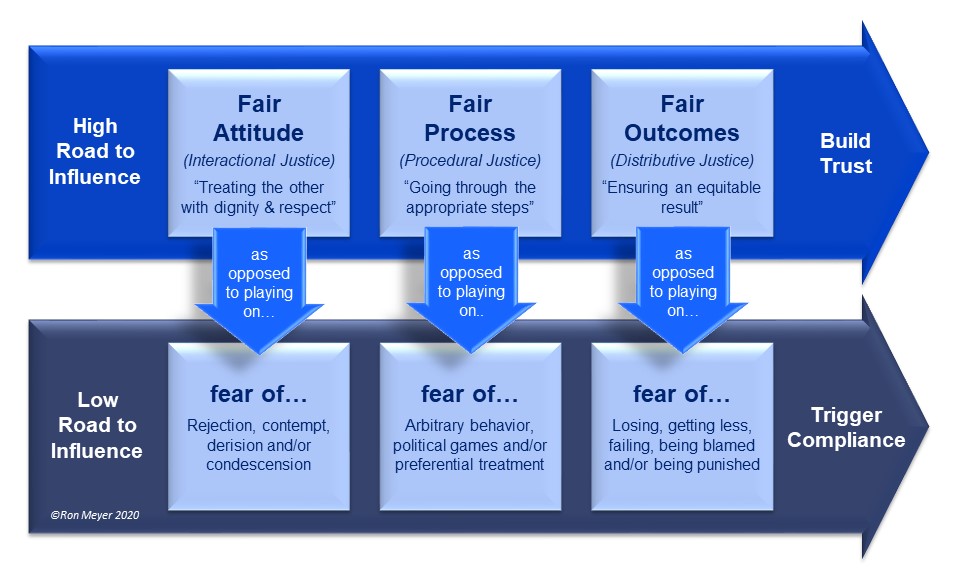 The three types of fairness are the following:

Where a leader fails to embrace others as respected counterparts, they can feel irrelevant, rejected or looked down upon with contempt, derision and/or condescension.

Where a leader fails to follow due process, others might feel at the mercy of his/her arbitrary whims, as pawns in his/her political games, and/or as victims of his/her partisanship.

Where a leader fails to share the benefits and losses fittingly, others can feel they are losing out or getting less, and/or fear being branded a failure, given the blame and punished.

August 2020
7I Roles of the Corporate Center