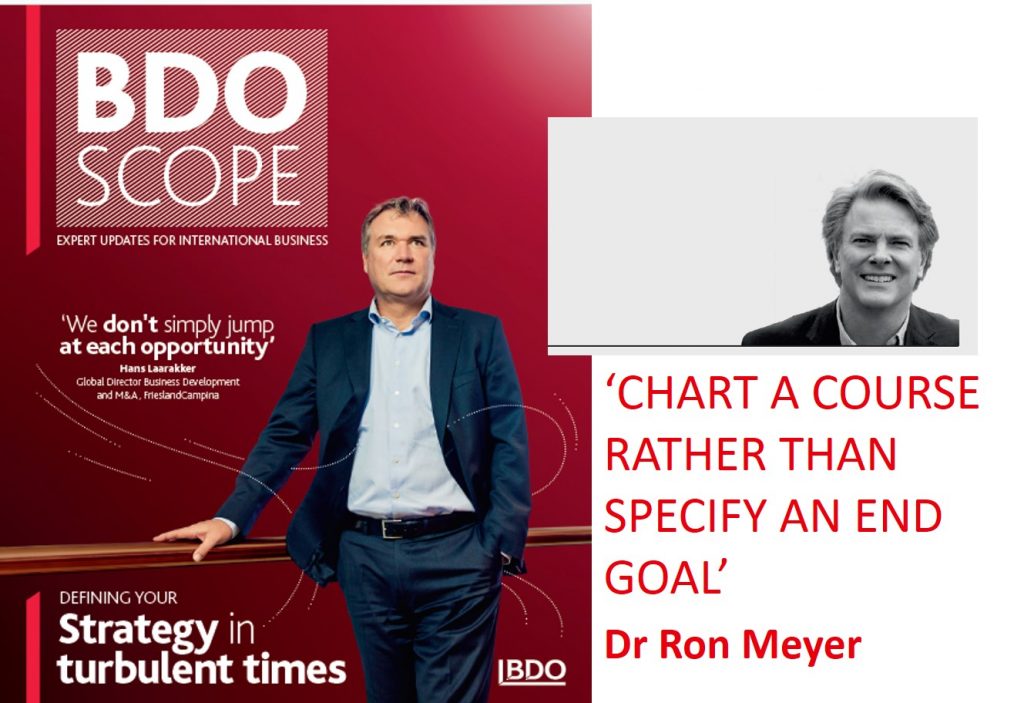 Dr. Ron Meyer was invited by BDO Scope Magazine to share his perceptions on new ways to formulate strategy in turbulent times. Read below his thoughts and recommendations:

‘The accelerating pace of technological change has made it very difficult for companies to formulate a business strategy. The classic top-down approach is no longer adequate. More executives also realise they can no longer leave strategy development to external consultants but have to do the job themselves. Ideally it should now be a continuous process in which a leader should involve as many employees and managers as possible. If they’re given the opportunity to implement the business plans, they will be much more engaged and there will be a greater chance of success.
‘Due to the acceleration of new, disruptive technologies, the most you can do in formulating a strategy is indicate a direction rather than specify a concrete end point. Could this have a paralysing effect? You can avoid this effect by remaining agile while accepting that you can never predict which technology is going to “win” and that you may sometimes get it very wrong. In 1995, for example, Bill Gates said the internet would never be a success. Today’s business leaders need to let go of their mechanical approach to governance and strategy development.’

Prof. Ron Meyer
Director of the Center for Strategy & Leadership
Professor of Strategic Leadership at TIAS School for Business and Society.

C4SL Managing Director and TIAS Professor of Corporate Strategy Ron Meyer quoted in an article by The Economist on the attempts of PPG to take over AkzoNobel. Read the full article here:

Check out this short but insightful interview about questions about the sense and nonsense of ‘born leaders’, authentic leadership and adaptation.

Blog on Business Innovation: The art of a good start

Publised on CFO.nl (in Dutch) a blog on securing a good start for business innovation processes: generating ideas that work. Not through mere brainstorming (does not work good enough) but through a strategic approach to the Harvard-approach of ‘brainswarming’.

Indonesia, with a population of over 260 million and a highly dynamic economy, sees a rapid of corporate universities. Both in numbers and quality. Thanks to the publisher of PPM Business School in Jakarta, the work of Dr. Martyn Rademakers covering cases, tools and theory from international sources, are now also available in Bahasa Indonesia. The resulting book  ‘Corporate University: Merancang, Membangun dan Mengelola Organisasi Pembelajar‘ and more information can be found at: http://ppm.co.id/corporate-university-merancang-membangun-dan-mengelola-organisasi-pembelajar/

Leaders need to be able to rapidly shift the leadership approach to fit with the altering circumstances. The question is what can be done to help leaders to become more agile. What does it even mean to develop leadership agility? In this webinar, Professor Ron Meyer will discuss his views on leadership agility, giving a sneak preview of his new book that will be published early next year.

You can now watch the webinar by Ron Meyer on https://www.onlineseminar.nl/crowdale/webinar/13780/developing-leadership-agility-by-professor-ron-meyer/#watch

Why Winning Organizations have Corporate Universities

Top-performing organizations such as Apple, General Electric, Shell, Mars and IKEA have established their own, company-specific corporate universities. They are not the only ones. Thousands of organizations around the world are following suit and either start, build, or upgrade their corporate learning activities – either called corporate university, academy or campus. All for good reasons: it takes organizational learning to win in a complex and rapidly changing business environment.

The challenge for executives to continuously align their organizations to a constantly changing world is not getting any easier. One thing is sure, though: winning companies have the capability to learn not only faster but also smarter than the competition. They are not only able to keep up with the strategic developments in their environment, but also to stir up the competitive landscape themselves.

Currently, corporate leaders see the following two questions emerging on their strategic agenda: Adaptability (or: ‘being agile’) and being attractive to talent. Both have learning as an important driving force. That offers opportunities for organizations to kill two birds with one stone.

A useful example here is the California-based company Apple. Observers argue that Apple interprets adaptability as changing the environment in their favor instead of vice versa, but it is safe to say that the company masters doing both at the same time. Constant adaptation is one of the cornerstones of the Apple strategy to outperform its rivals. In the book Inside Apple (by Adam Lashinsky), it is described how CEO Steve Jobs, shortly before his passing, secured the source of Apple’s adaptability by establishing a corporate university: the Apple University. Not a real university, but the American denotation of what is known in Europe and Asia as a corporate academy.

The core of what the Apple University does, is keeping the ‘think different’ culture in alive all its facets. Not in the preserving sense of ‘what would Steve do?’ but focused in the future that is shaped by the people at Apple themselves. That is what strategic learning is all about. ‘We are focused on inventing the future, not celebrating the past’, as Apple executive Phil Schiller recently noted aptly. The Apple University is therefore not a mere learning factory that organizes courses with coagulated knowledge, but a strategic vehicle to let the organization excel through learning and knowledge transfer the Apple way. For talents, the Apple University embodies a very attractive proposition: learning and having an impact on the organization and its environment at the same time. Chances are, Apple will not have to spend very much on personnel ads.

It is not just the well-known company from Cupertino with the fruity logo that has discovered the corporate university as a strategic instrument. Many have preceded Apple, including many thousands of large and smaller organizations around the world. Ultimately, these organizations are interested in a clever cross-fertilization between learning and strategy. Thereby, they are not just increasing their adaptability, but they are also attracting, building and retaining the talent they need to excel now and in the future.

The long-term success of corporate academies has not gone unnoticed. IKEA has its ‘College’ to drive international growth, Mars Inc. has its Mars University to accelerate and leverage strategic change, Pixar has its Pixar University to stimulate knowledge exchange and creation between artists and computer experts. More and more companies are rethinking and reshaping their learning capabilities from a strategic perspective. After all, constant adaptation to a dynamic business environment without learning is impossible. Moreover, attracting, building and retaining top talent takes the provision of distinctive learning opportunities. No wonder leaders of winning companies around the world see – and utilize – corporate universities as a must-have strategic asset.

The book ‘Corporate Universities: Drivers of the Learning Organization’ by Martyn Rademakers builds on this notion. In his book, the author explains in detail how leaders of top companies in the USA, Europe and Asia use their corporate universities to drive strategic renewal, change and optimization. It is time to unleash the full potential of organizational learning. The know-how is available, the need higher than ever before.